When I work with teachers, I spend a lot of time helping them plan. In a coaching role, we plan lessons together. We plan assessments or instructional strategies. In a workshop setting, we think more like strategic planning. How do topics flow within a unit? What are the pitfalls and challenges of teaching a particular topic?

Every now and again, someone will say something like, “I just need them to know that when you add two numbers you get a bigger number.” Then, my heart stops beating momentarily.

When NOT to Reach Out and Touch Someone 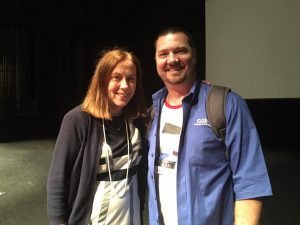 Karen Karp is one of my personal math heroes. So much so that I allowed myself to exert privilege as a CAMT Board member to get a picture with her at CAMT 2016 in San Antonio when she was an opening speaker! Serious fanboy moment.

In the above scenario, I reach deep inside and ask myself for strength from Dr. Karp. Fortunately, she and her colleagues Sarah Bush and Barbara Dougherty have given us a lot of information with their article series, “Rules that Expire” for Grades K-5, 6-8, and high school. These articles appear in NCTM’s professional journals. Having access to those archives justifies your NCTM membership.

A rule that expires is something we tell our students that works right now but at some point becomes no longer true. In each of their articles, they highlight a certain number of rules that teachers tell their students that at some point in their mathematical careers are no longer true. They’re very convenient in the short term and usually have caveats that teachers leave out, like “…for whole numbers only.” What I like most about the Karp, Bush, and Dougherty articles is that not only do they make these rules explicit, but they then tell us when the rules expire so that we may consider alternatives.

Why is this problematic? An excellent question! When those rules expire later on, students are bewildered because their beloved teacher told them it was always true. That bewilderment becomes confusion, and that confusion becomes a distaste for mathematics. As Yoda once said, fear leads to anger. Anger leads to hate. Hate leads to suffering.

How do we cause suffering in future mathematics classrooms? Here are some examples.

These are just some of my favorite rules that expire because they illustrate the caveats that we should really place when we use procedural tricks-of-the-trade in mathematics classrooms. Karp, Bush, and Dougherty identity 12 rules that expire in elementary grades, 13 rules that expire in middle grades, and 13 rules that expire in (or before!) high school. Their Rules that Expire articles make for great conversation in your mathematics department or professional learning community (PLC). Using a protocol to run a text-based discussion on an article like these helps teachers build their mathematical knowledge for teaching while thinking about how they can better serve their students.